Is Cocomelon bad for babies? A viral post says that it acts as a drug stimulant for kids. Read about it, and some reminders about screen time here.

What can you read in this article?

If you have small children, you’ve probably seen a few (or many) episodes of the show Cocomelon on Youtube or Netflix. And while it’s a show that seems to be very educational, a child development expert claims that watching Cocomelon acts as a drug stimulant for young children.

Is Cocomelon bad for babies?

An Instagram story of Jerrica Sannes has been circulating around mommy groups insocial media, where she wrote about the disadvantages of watching Cocomelon for kids.

“Cocomelon is so hyperstimulating that it actually acts as a drug, as a stimulant. The brain gets a hit of dopamine from screen-time and it seems that the stronger the ‘drug’ aka the level of stimulation a show delivers, the stronger the ‘hit.’

This leads to 1) the children experiencing symptoms of addiction and withdrawal, obviously leaving them completely dysregulated, and 2) a general discomfort in the speed of everyday life. The more they watch the show, the more the brain begins to expect this kind of stimulation. This makes it impossible for them to play creatively and without entertainment.” 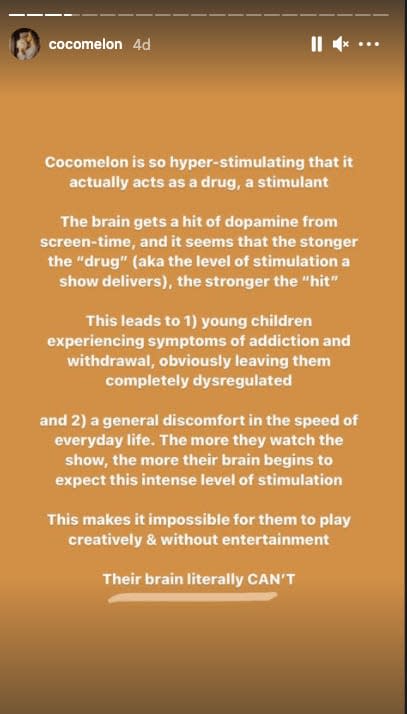 If you think the post was just a random rant from a mom who’s not into the show, think again. The story’s author, Jerrica Sannes is a child development specialist with a master’s degree in Early Childhood Curriculum and Instruction, a bachelor’s degree in Family and Child Development and over 15 years of extensive experience working with young children.

“Millions of children will grow up with poor self-regulation skills, attention and behavioral disorders that will mimmick ADHD and autism, and we can only guess what other symptoms …” added Sannes, referring to the millions of children who watch Cocomelon.

In her story, Sannes also shared that researchers are still trying to figure out the effect of stimulating shows on kids, and the results of these studies will probably come too late when the kids are all grown up. However, she reminded parents to look at the anecdotal evidence and observe how these shows are affecting our kids.

“The best we can do is take anecdotal evidence and carefully observe our children’s behavior to decide if we like how a show is affecting their brain.”

She also shared some warning signs to see if the child is already showing signs of addiction. Sannes wrote, 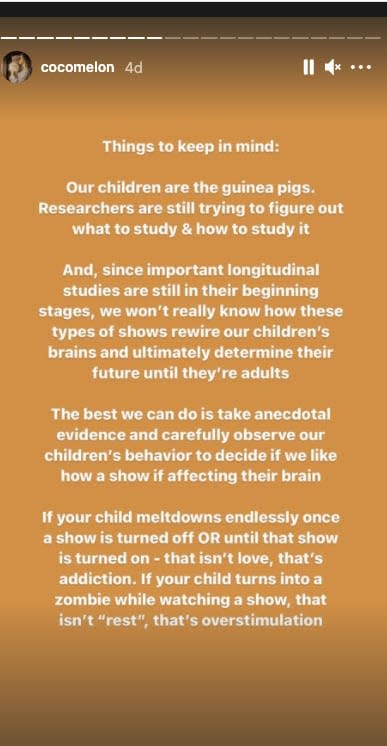 Harmful effects of screen time on babies and toddlers

According to the American Academy of Pediatrics (AAP), screen time, or watching shows and games using television and other gadgets, bring long-term negative effects to young children.

A lot of evidence suggests that screen time for babies and toddlers (18 months and younger) have lasting effects on their language development, reading skills, short term memory, problems with sleep, attention and self-regulation.

9 signs that your child may be addicted to the screen

While Cocomelon is one, if not the most popular show for babies and toddlers right now, there are a lot of other overstimulating shows on YouTube that have the same effect on young children.

So, how will you know if your child is addicted to the show or with the screen?

In 2019, a group of researchers created the Problematic Media Use Measure (PMUM) for parents of kids ages 4 to 11, to gauge if their child’s media use is becoming detrimental to their overall health.

Here are some warning signs of media addiction in children:

It’s hard for your child to stop using the screen. He starts having tantrums when you ask him to stop watching his show.

Forget toys or playing – watching or using gadgets is the only thing that motivates your child.

All your child can think about is watching TV or on his gadgets.

Your child’s screen media use would interfere with family activities.

Your child’s use of gadgets is already starting disagreements between you and your spouse or other members of the family.

Your child gets frustrated or starts acting up when she is not allowed to watch TV or use gadgets.

The amount of time your child wants to use gadgets or watch is increasing over time.

If your child tries to sneak around so he can watch or use gadgets, he’s probably too into it already.

When your child is feeling down, screen time or watching seems to be the only way to cheer him up.

For babies and toddlers, you may notice defiance or acting out when you try to remove the screen from him or when you don’t give him the gadget when he asks for it.

If you notice these things in your child, it’s probably a sign that you need to change something about his screen time or talk to your child’s pediatrician about it.

Make the most out of screen time: 12 best shows for toddlers on Netflix

What can parents do about it?

As a mom herself, Sannes said that from observing her own children, other children and getting feedback from other parents, she noticed that fast-paced shows really have negative effects on kids. She noted that shows that are slower in pace, less stimulating and model good behavior are more beneficial to children.

“At the same time, it’s also obvious to me that children can benefit from slow-paced shows that model kindness, use advanced vocabulary and spark imaginative play.”

In another Instagram story, she also reminded parents not to feel bad if they let their kids watch Cocomelon or other overstimulating shows for kids. The child expert also shared that it’s possible to reverse the negative effects of watching overstimulating shows like Cocomelon on kids by helping your child break the addiction and replacing it with healthier alternatives.

“Don’t beat yourself up – you’re in good company of literally millions of well-being mamas who just didn’t know! You can reverse the effects. You’ll need to work towards breaking her TV habit, supporting her through the ‘withdrawal’ and working towards replacing screen time with independent play to help her brain and hormones reset,” she wrote in response to a mom, still in the topic of Cocomelon.

AAP recommends that children under 18 months should not be allowed screen time except for video chats with relatives, which is a healthy form of communication during the pandemic.

Children 18-24 months should be allowed a bit of screen time, with the supervision of an adult. Refrain from letting your children watch or use gadgets by themselves. Take a few minutes to sit down with your child and ask him about the show. You can even encourage him to sing and dance along to the song instead of just watching.

Another way to lessen the negative effects of screen time is to include other fun, non-screen activities during the day. Take a walk together, water the plants, or play outside with your child.

As parents, it’s still our prerogative if we will let our children use gadgets and how much time they’re allowed to watch. However, it is also our responsibility to discern if the shows that they are exposed to will harm them or benefit them in the long run.

While everyone is probably guilty of letting the screen “babysit” their kids in some way, it’s better if we take control of our child’s screen time and encourage healthy habits while they’re still young.

Our goal is to create a safe and engaging place for users to connect over interests and passions. In order to improve our community experience, we are temporarily suspending article commenting