We may earn commission from links on this page, but we only recommend products we believe in. Pricing and availability are subject to change.
Rick Broida
Updated August 2, 2022, 9:44 PM·10 min read

If you own a kitchen and a mouth, the question is no longer, "Do I need an air fryer?" The question is, "What's the best air fryer to get?" It's amazing how quickly these devices went from kitchen novelty to kitchen essential. I'm not exaggerating when I say we use ours almost daily; it's been a game-changer. Why? For starters, speed: It heats up in about a minute. And because it's basically a countertop convection oven (meaning it circulates hot air), it cooks faster than a conventional oven.

We use it primarily for veggies: potatoes, onions, peppers and the like get tossed in a bit of oil with salt and pepper, then "air fried" until they're perfectly roasted. But the cooker is also great for things like bacon, chicken breasts, bananas (they caramelize beautifully), chickpeas (which turn into a wonderful crunchy snack) and frozen chicken nuggets.

I especially love it for reheating pizza, which comes out crisp and toasty, not all soggy like in a microwave. And you need to try air fryer donuts immediately.

Below I've rounded up what I consider the best air fryer models in a variety of categories. Some of my selections are based on personal experience; in recent years I've tested quite a number of these ovens. I'm also factoring in things like price, product reputation, user ratings and reviews I've found elsewhere. In other words, if there's a model here, there's a reason it's here.

I should also note that all prices are accurate as of this writing, but may change owing to availability, store sales and so on. 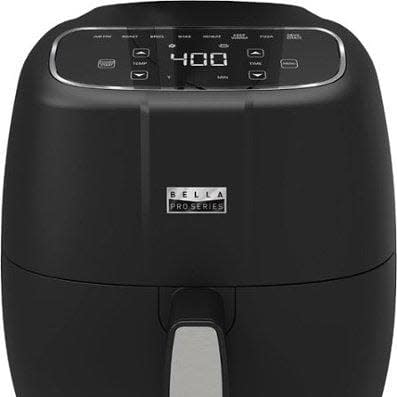 Often on sale for $50 or less, the Bella Pro Series proves you don't have to spend a lot to get a good air fryer.

Air fryers sound like expensive machines, don't they? Surely something as fancy as a countertop convection oven must cost a pretty penny. Some do, but there are some surprising bargains out there as well.

Case in point: The Bella Pro Series is available in a 4-quart size for just $50. (The "regular" price is $70, but Best Buy has discounted it consistently for months.) Similarly, it's not uncommon to find the larger Bella Pro Series 8-quart for $70-$85, though at times that model's been as low as $50. This brand is exclusive to Best Buy, where sales are frequent. Key takeaway: Never pay full price for one of these.

Fortunately, "low price" doesn't equal "low quality." These fryers feature digital controls panels, multiple cooking presets, a dishwasher-safe tray and all the other important basics. For proof of their "air-cumen," look no further than the 4.7-star average rating from thousands of buyers. 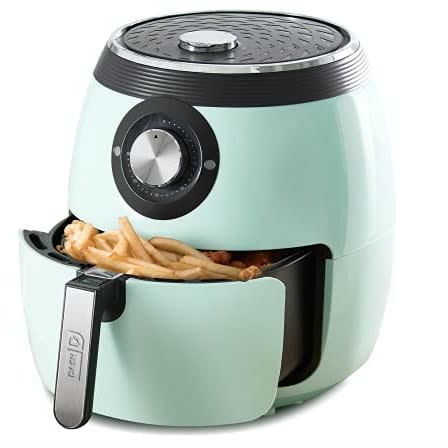 No more frumpy fryer: This is one of the five fun colors available for the Dash Deluxe.

Rocking a retro décor in your kitchen? You'd be forgiven for disliking most air-fryer designs, which tend toward "black bucket." Not so the Dash Deluxe: It's a curved, colorful fryer that would look right at home in any throwback kitchen.

Though you can get the Dash Deluxe in black, the "fun" options are aqua, red, white and yellow. Even the controls are old-fashioned: One oversize analog dial for temperature, one for cook time. It's big, too, with a 6-quart basket that can accommodate a family's worth of French fries.

This one has proven a winner with Amazon customers, too: It earned a 4.6-star rating from over 11,000 buyers. But watch your wallet: Although the Dash Deluxe has a list price of $100, it frequently goes on sale for $80 — sometimes even less. Don't pay full price for this unless you're in a serious rush. 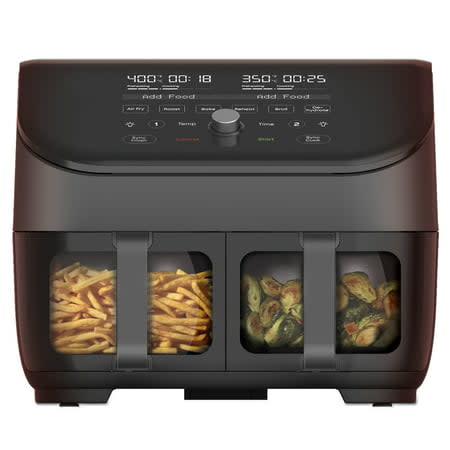 It's two, two, two air fryers in one! Plus it has windows so you can peek at your food while it's cooking.

What's better than one air fryer? Two air fryers, obviously! That's what you get from Instant's product, which is basically a double-wide with two separate 4-quart drawers. Now you can cook, say, a batch of chicken strips while roasting veggies at the same time.

Thankfully, the Vortex Plus takes the guesswork out of this dual action, with individual timers that will ensure both sides finish cooking simultaneously. And speaking of guesswork, other air fryers require you to pull out their drawers to check the status of the food inside, but the Vortex has windows. That means you can watch cooking progress without interrupting it.

The flipside to all this is that you're getting two smaller-ish drawers instead of a single large one. If you're cooking for a large group, that could pose challenges. Similarly, the fryer itself is definitely wider than most, something to consider if counter space is at a premium.

I recently put the Vortex Plus through its paces and found it an extremely useful kitchen companion. However, it's on the noisy side, and the terse, barely illustrated instructional manual might leave you guessing at how best to cook various items. 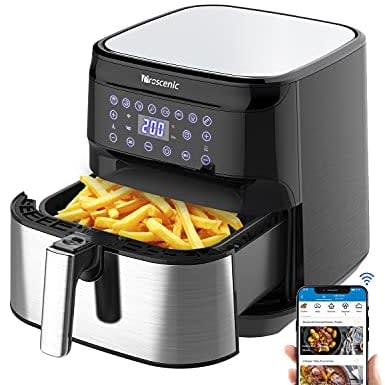 Can your air fryer do this? Respond to voice and app commands, I mean. Proscenic's T21 can!

At first glance, the T21 resembles countless other cookers out there — not that that's a bad thing. It has a 5.8-quart non-stick basket, which is large enough for a family-size batch of French fries (among other foods), and a digital touch panel with various controls and presets.

So what's different about it? In a word: Wi-Fi. The T21 can connect to your home network, which allows for things like voice commands ("Alexa, turn on the air fryer") and pairing with your phone to monitor cooking, adjust temperatures and so on.

Is all that really necessary? Not really. On the other hand, if you want to get a jump-start on dinner, why not signal the air-fryer to preheat when you're pulling into your driveway? Or ask Alexa for a cooking-status update when you're in a different room of the house?

If a smart air-fryer is priced the same as a non-smart one, surely it makes sense to choose the former? Lots of people already did: The Proscenic T21 has a 4.6-star average rating from over 6,400 Amazon customers, so chances are good you'll end up a happy chef.

One thing to note about the price: It's $129, but there's almost always a coupon you can clip for a solid discount. At this writing, for example, it's good for $40 off. 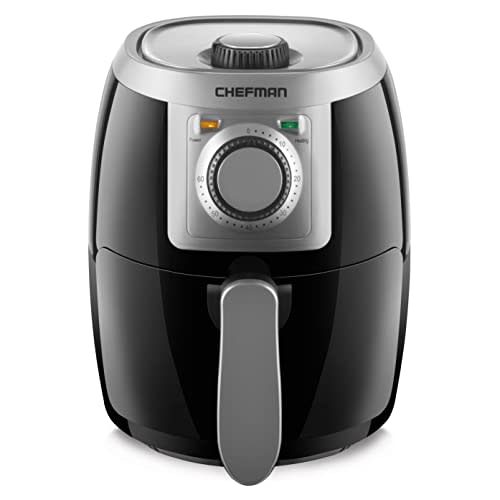 It's hard to tell from the photo, but this wee air fryer stands only about 12 inches high -- perfect for small living spaces.

Whether you're frying for one or just don't have a lot of kitchen space (I'm looking at you, dorm rooms, RVs and studio apartments), a small machine might be just the ticket. And there's a pretty clear winner in this category: The 2-quart air fryer from Chefman. (It's so small, in fact, it doesn't even have a product name, just a brand.) Nearly 15,000 Amazon buyers collectively rated it 4.6 stars out of 5.

Though it measures just 9.75 x 9.75 x 12.5 inches, the Chefman can still heat up to a full 450 degrees. (That's surprising, given that many larger fryers top out at 400.) Both the drawer and removable rack are top-shelf dishwasher-safe. The price is diminutive as well: It's only $37.

As you know, you can get a much larger model for only a few dollars more (see the Bella Pro Series, above). But if space is at a premium, this is a fryer that will almost certainly fit. 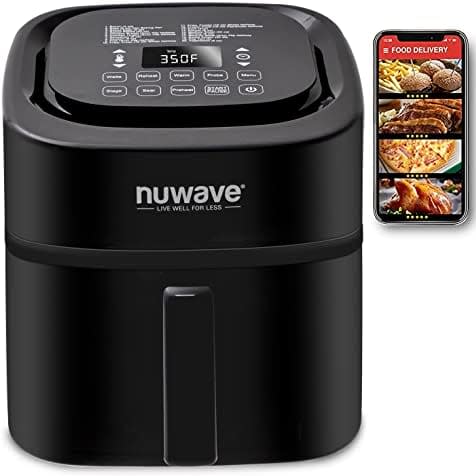 The NuWave Brio 8-quart offers more cooking space than most air fryers, plus a temperature probe for perfectly air-fried meats.

Cooking for a big family? Consider choosing a big air fryer. The NuWave Brio's basket can hold up to 8 quarts, meaning there's space enough in the drawer for a 5-pound chicken or up to 3 pounds of chicken wings. And speaking of meat, there's an incredibly useful feature here you won't find in many other models: a temperature probe.

That means you can be absolutely sure your poultry and other meats are cooked to a safe temperature, without having to constantly stop the fryer and take manual readings.

Just one problem: There are some conflicting details regarding the Brio's capabilities. Specifically, the product description indicates 100 pre-programmed recipe functions, but there are only 20 imprinted on the top of the actual unit. And one spot on the Amazon product page mentions just "6 preset cooking functions." Meanwhile, NuWave's website doesn't have the instruction manual for this model, and the manual for the six-quart version doesn't discuss presets at all. I tried to reach NuWave for clarification on all this and received no response.

That hasn't prevented the Brio 8QT from earning an impressive 4.4-star average rating from nearly 9,500 Amazon shoppers, and other Brio models have scored high marks from Consumer Reports. 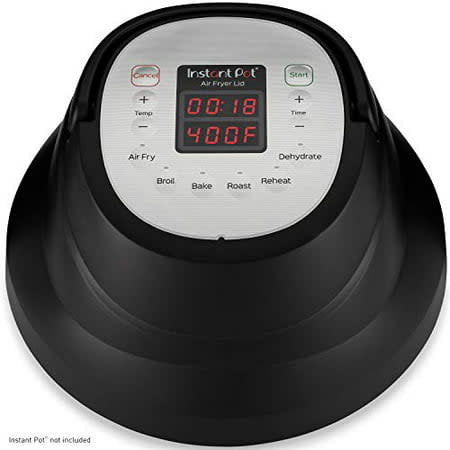 It's not the most elegant-looking solution, but Instant Pot's Air Fryer Lid transforms your pressure cooker into a... well, you can probably guess, it's right there in the name.

Don't love the idea of yet another appliance cluttering up your countertop? If you already own an Instant Pot pressure cooker, here's good news: You can turn it into an air fryer with one simple, hugely popular accessory: the Instant Pot Air Fryer Lid.

This is basically all the mechanical parts — heater, fan, controls, etc. — of an air fryer inside a replacement lid, one that fits most 6-quart Instant Pot models. So you just set aside your existing lid, drop in the included basket and cooking tray, then air-fry much like you would with a traditional machine. It makes for a fairly tall, somewhat awkward-looking appliance, but it gets the job done.

And done quite well, as evidenced by the mostly glowing reviews found at Amazon and elsewhere. Here's the thing, though: The Air Fryer Lid typically sells for $80-$90 (though at this writing it's $70), a price that would buy you a standalone air fryer that's as good or better. So the only real advantage here is leveraging an appliance you may already own in order to save space. If that's appealing, then this is definitely worth a look. 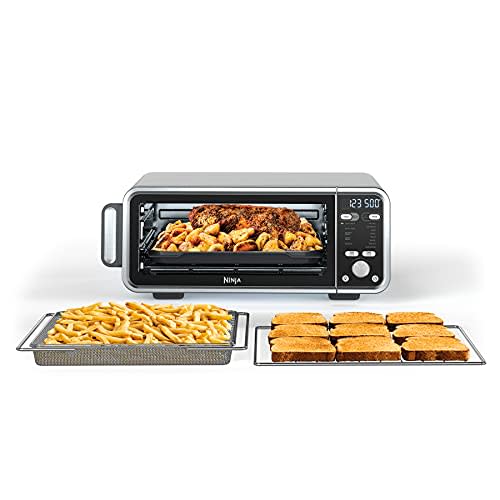 Like a toaster oven on steroids, the Foodi SP301 can not only bake, but also air-fry, air-roast, broil and even dehydrate.

One word: pizza. If it's a staple food in your house, this is the model to get. The Foodi SP301 has room enough to reheat an entire pie (up to 13 inches), not just a slice or two like most other air fryers. That's because it's shaped more like an oven and less like a bucket.

Doesn't that mean it takes up more counter space? A wise assessment, grasshopper, but the SP301 has a cleverly designed hinge at the back: The entire oven can rotate 90 degrees to stand up and out of the way when not in use.

It can also do a lot more than most air fryers, including roasting, broiling, toasting and even dehydrating. The SearCrisp option promises cast iron-like searing.

If there's a downside to this oven-like design, it's height: While pizza, chopped veggies and other flat-ish foods fit just fine, the SP301 can't really accommodate taller foods: whole chickens, bread loaves and high-piled sandwiches, for example. Although the Foodi is my personal-favorite air fryer, this issue does pose a problem from time to time.

Our goal is to create a safe and engaging place for users to connect over interests and passions. In order to improve our community experience, we are temporarily suspending article commenting