We may earn commission from links on this page, but we only recommend products we believe in. Pricing and availability are subject to change.
Rick Broida
January 10, 2023, 2:33 PM·6 min read

Our planet's unfortunate "new normal" includes ever-worsening storms, which means a greater likelihood of power outages. That can be an inconvenience or it can be deadly. Needless to say, it might be time to consider some kind of backup-power system. If a gas generator isn't the right fit (because of noise or where you live, for example), Bluetti makes a robust battery-powered unit that can run just about anything: refrigerator, space heater, CPAP machine and so on. The AC200P Portable Power Station normally sells for $1,599, but right now there's a $200-off coupon you can clip. Should you? 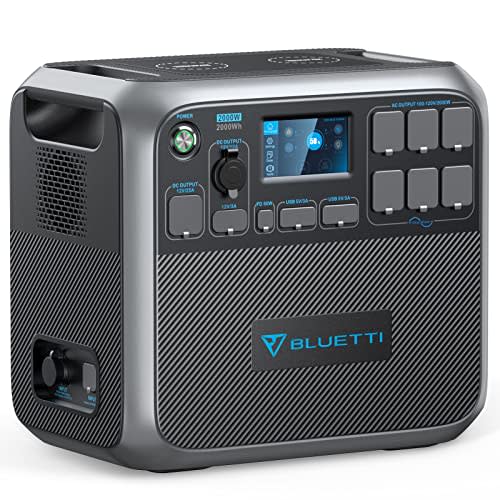 $1,399$1,699
Save $300 with coupon
Assuming you can lift it (it's 60 pounds!), the AC200P is a powerful, versatile battery backup that can run appliances large and small. Pair it with optional solar panels for virtually unlimited free power.
$1,399 at Amazon

That ties the lowest price on record, by the way. I've thoroughly tested the device, and it's pretty amazing — though I do have a few reservations.

The AC200P is one big battery, measuring 16.5 by 11 by 15.2 inches. It's compact enough to store away in, say, a closet until needed, but the real issue is weight: It's 60 pounds. Although it has sturdy handles embedded in the top corners, it's not what I would call "portable." I'm a 6-foot dude, and I struggled to carry this from one room to another.

So while it's great that you can operate the AC200P indoors (no gas means no fumes), it's just too heavy to relocate with ease. I wish Bluetti had thought to add wheels of some kind; as it stands, you may want some kind of cart to tote this around.

My review sample arrived with about a 60% charge, meaning I needed to plug in the included AC adapter to get it to 100% — which took a couple hours. That adapter is large and a bit noisy owing to its built-in fan. Only after I'd finished charging did I notice something potentially important on the Amazon product page: Bluetti recommends fully depleting the battery on first use before fully charging it. Wait, what?

I pored through the instruction manual and found no mention of this, and the FAQ section on Bluetti's site doesn't mention it, either. If this really is a necessary step before using the product, the company needs to do a much better job informing customers.

You can charge or power a lot of stuff with this thing. In addition to half a dozen AC outlets (three-prongers, all of them), the AC200P offers four Type-A USB ports and one 60-watt USB-C with Power Delivery. That covers the AC side of things; on the DC front there's a 12V/25A port for RVs, a standard car socket (also known as "power port," previously known as "cigarette lighter") and a pair of DC 5521 ports.

I was particularly pleased to see two Qi wireless charging pads (for phones, AirPods, etc.) on the top side of the unit — but confused as to how to turn them on.

See, the AC200P has a power button and a touchscreen, the latter used to check status, tweak settings and, of course, turn on the AC and DC supplies. I assumed the pads would be powered by AC, same as the USB ports typically used to charge phones. Turns out, nope: You have to turn on DC to use Qi charging. This isn't a huge deal, but it's not mentioned anywhere in the instruction manual.

So what kinds of devices can you run with the AC200P, and for how long? Any appliance that requires up to 2,000 watts is fair game to plug in. A standard refrigerator, for example, uses anywhere from 300-800 watts. A space heater typically consumes up to 1,500 watts. As for how long you'll get, that will vary significantly depending on how many devices you have plugged in and what they are.

Bluetti hilariously provides this formula in case you have a degree in algebra: "Battery Capacity × DOD × η ÷ (load W) = charging time(unit：h)". Um, sure. The bottom line is, you should be able to keep an essential appliance or two running for at least a few hours, if not overnight. And little things like phones and drones, you can charge dozens of times.

(Side note: A few months after writing this review, we lost power for about 24 hours due to a storm. I plugged our refrigerator, a fairly substantial LG model, into the AC200P. It ran for a solid 10 hours, enough to keep the food inside from spoiling.)

When it comes to recharging the power station itself, you have a surprising number of options. The AC adapter is one, of course, but there's also cabling provided for recharging via your car's power port or even a car battery.

Are you living in a zombie-apocalypse situation? Don't worry if the grid is down; Bluetti's optional solar panels can recharge the AC200P using sunlight. However, this is a costly and somewhat confusing solution. Although the Bluetti SP200 200-watt solar panel says it's compatible with the AC200P, a closer look reveals that you'd need three of these — at $500 a pop! — to fully recharge the power station, and that it would take 5-7 hours to do so.

The AC200P product page is especially misleading because at least one promo image indicates that solar charging would take just 3.5 hours via "solar panel" (singular). The reality is that you could get a single Bluetti PV350 solar panel (currently $849) and charge the AC200P in 7.5-8 hours, again according to Bluetti.

For anyone living off the grid (either by choice or because of zombies), this is definitely a nice option to have, especially considering you can solar-charge the unit while still using it to deliver power. But it's a considerable added expense.

Bluetti AC200P verdict: Should you buy one?

Expense is definitely a big part of this equation, as you're looking at an investment of over $2,000 if you include the PV350 solar panel. There's no debating the AC200P's versatility, which could definitely come in handy during storms, a family camping weekend or your next long stretch in the RV.

Because it doesn't require gas, it's much safer to transport than a typical generator, and of course it can be used indoors as well. (It's not completely silent, though: Sometimes a fan kicks on, which is something to consider if you're using this near where you sleep.)

My key issues are with the practicality-limiting weight of the unit and the short, poorly written, incomplete documentation. I feel anything dealing with electricity should be clearly explained and illustrated; this fails in that respect. That said, there's nothing especially complicated about the AC200P, just a bit of a learning curve for a few areas.

The verdict, then: recommended, with caveats.

$1,399$1,699
Save $300 with coupon
Assuming you can lift it (it's 60 pounds!), the AC200P is a powerful, versatile battery backup that can run appliances large and small. Pair it with optional solar panels for virtually unlimited free power.
$1,399 at Amazon