We may earn commission from links on this page, but we only recommend products we believe in. Pricing and availability are subject to change.
Rick Broida
September 6, 2022, 3:10 PM·8 min read

I've been flying drones since there were drones to fly, but I've never had an experience like this.

The DJI Avata looks like a fairly traditional flying camera, but with two key differences: first-person-view (FPV) goggles that let you see what the camera sees and a motion-sensitive controller that lets you perform amazing feats of aerial acrobatics.

The end result is an out-of-body thrill ride that was previously the purview of birds alone. I'm having so much fun with this, I barely want to take the time to write about it. The kit is expensive (just under $1,400) and not especially novice-friendly, at least in terms of setup, but it's absolutely worth it. Read on for my complete DJI Avata review. 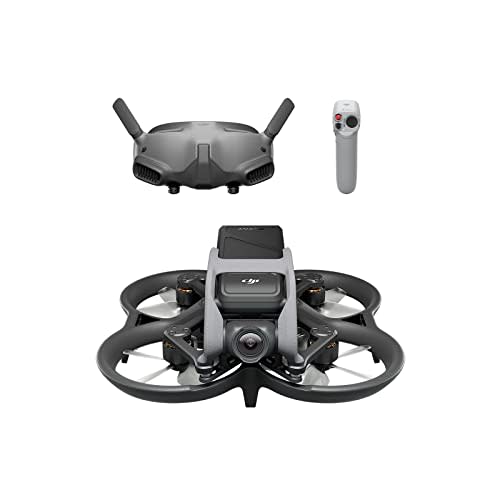 If you can swing the cost and don't mind a little learning and practice, the DJI Avata is a ridiculously fun way to fly like birds do -- and see what birds see.

The Pro-View Combo consists of three major components: The drone itself, the DJI Goggles 2 and the DJI Motion Controller. There are other configurations available, including a slightly cheaper one with lower-resolution goggles (spend the extra, trust me), but anyone new to this hobby will likely need the full setup.

Unfortunately, despite the high price of the bundle, DJI didn't include a handful of fairly important items:

Arguably the worst omission is any kind of printed instruction manual or even a quick-start guide. Granted, for something like this, a tutorial video is the better bet, and thankfully DJI offers a detailed Avata first-use video to get you up and running (er, flying). I highly recommend watching it at least once, perhaps even before buying the kit, to give you an idea of what's involved.

With that in mind, I'll spare you a detailed account of the basic setup. Just take note that you'll need both your phone (with the DJI Fly app installed) and a standard charging cable to connect it to the goggles. (DJI supplies only an adapter cable.) You'll probably also want a chair to sit in, especially if you're prone to motion sickness. (I am, but found that I could fly the Avata without issue as long as I stayed seated.)

One other set up note: The Avata requires FAA registration, and both the drone and goggles must be "activated" via connection to your phone. You'll almost certainly have to wait on firmware updates as well before you can take to the skies. Between all that and the time required to charge the various batteries, it could literally take hours between unboxing and actual flying.

As noted, I've flown zillions of drones before, but this was my first-ever experience with FPV goggles. The DJI Goggles 2 are comfortable to wear, though they're not designed to accommodate eyeglasses. Thankfully, the independent lens-adjustment controls allowed me to see clearly even without my progressives, which in itself was remarkable. And because the goggles produce 100 frames per second at 1080p resolution, images looked razor-sharp and exhibited no lag that I could detect.

This is, without question, the DJI Avata secret sauce. It's one thing to look at drone footage after the fact; it's quite another to see it captured in real-time in your field of vision (which in this case spans an impressive 155 degrees). Once I'd strapped on the goggles, started the motors and lifted off the ground, I was no longer seated in my chair; I was the tiny pilot of an amazingly nimble aircraft.

The Motion Controller makes flight incredibly simple, even for total novices. Instead of futzing with a pair of joysticks, you simply hold the controller upright and tilt it in whatever direction you want to go: up, down, left, right. A trigger switch controls your speed; let go and the drone hovers in place. In Normal flight mode, you can hit 18 mph; Sport mode will get you up to 30 mph. Those aren't racing-drone speeds, but trust me when I say they feel fast — especially if you're zooming along close to the ground or weaving through obstacles.

The goggles' heads-up display includes not only data like speed, altitude, battery life, recording status and so on, but also an omnipresent augmented-reality "H" that helps guide you back to Home base (i.e. wherever you took off). More than once this kept me from getting lost after finding myself half a mile away after just a minute or two. Seriously, once you get the hang of flying, you won't be able to resist exploring far and wide — which you can do given the Avata's six-mile range. To be clear, the effective range can be a lot shorter, especially with trees or other obstacles in the way, but if you have an open area you should be able to travel quite a distance.

I'll pause here to repeat myself: This. Is. Incredible. It's the closest any of us will get to flying like Superman. (Honestly, I just want to lay on my belly and point a fan at my face to get even closer to that feeling.)

DJI promises up to 18 minutes of flight time on a charge, but in my experience it was more like 15. Obviously, there are variables that can affect it, including wind, but it does drive home the desire for at least one extra battery (pricey though they may be). The good news is that you get notifications when power runs low, and eventually the Avata will fly itself home to avoid getting stranded (or, worse, crashing).

Another safety measure: The drone has solid propeller guards, meaning that a collision with an object (or, even scarier, a person) won't necessarily cause damage. And if the Avata takes a tumble someplace far away or not easy to reach, you can engage Turtle Mode (!) and it should be able to flip itself upright again. That's pretty genius.

DJI has been making drones long enough that a few Avata issues seem especially perplexing. For example, the goggles use a coiled cord to connect to an external battery, but there's no obvious (or logical) place to put that battery. The ground is too far away; the cord pulls too much on the goggles. So mostly I just ended up resting it in my lap, which is awkward.

Meanwhile, the drone's microSD slot and USB-C port are really hard to access, as they're located behind one of the propellers, with a tight-fitting rubber plug that must be removed and reinserted every time. I was constantly concerned I might damage the propeller.

Another consideration: DJI is currently on a US government blocklist for some questionable business practices. You'll have to decide whether you want to support the company by purchasing its products.

Should you buy the DJI Avata?

That unfortunate wrinkle aside, the DJI Avata is an amazingly fun cinema drone that's well-built and easy to fly, at least once you get past the lengthy setup process. There are plenty of drones that can capture crisp 4K video, but the combination of DJI's goggles and motion controller turn this into a completely different experience. Whether you want to enjoy the thrill of flight or raise your moviemaking game, the Avata is a revelation.

That said, it's definitely a product for responsible adults; I want to caution against buying this for kids because there's real potential for harm. That's true of any drone, but this isn't a toy, nor should it be looked upon as one.

Of course, that's immediately reflected in the price. It may be years before you can buy an FPV drone like this for less money. So if you can afford it now, don't wait. You'll miss out on too much fun.

If you can swing the cost and don't mind a little learning and practice, the DJI Avata is a ridiculously fun way to fly like birds do -- and see what birds see.

Looking for more great Amazon tech deals? Check these out: